Thank you for all your lovely comments on my last two posts and a warm welcome to my new followers. I hope that you'll enjoy reading my posts. As promised I want to write about my wonderful Yorkshire experiences.

I just had a look at all the pictures I have taken last weekend when my husband (I will call him J from now on as it is the first letter of his name) and I travelled to the Yorkshire Dales for a short trip. It's been our 16th wedding anniversary and usually we do not go in for something special (just a good meal in the evening and some flowers for me :-)). But this year my mother had time to take care of the children, the dog and the house and we used the opportunity to get away for some days.

Since I had seen the photos of last year's Yarndale I had told J that I would love to go there eventually. And as he is a perfect planner (if it was possible he would love to plan our holidays for the next 20 years...), he booked two flights to Manchester and told me to search for an accommodation. I was so excited! It is really something extraordinary for us to go an a holiday just the two of us. Since we have children (my son is 11 years old) we mostly travel to the Netherlands or to Denmark because it is just the easiest and the most inexpensive. I wracked my brains where I would like to stay the three nights but looking at the prices I soon realised that a good B&B would be best for us. Finally I came across the Bondcroft Farm, a lovely B&B in Embsay just on the outskirts of Skipton.

On Thursday, the 25th veeery early in the morning we drove to the airport of Hamburg and 1,5 hours after departure we stood at Manchester airport. We had booked a car at the airport and J bravely got behind the wheel. "Why on earth do the British have to drive on the wrong side of the street?", J uttered once in a while concentrating hard on the traffic.

We didn't want to stay in Manchester for long but I wanted to take a look at Chinatown. Since I studied sinology when I was a young woman, my interest in China has never ceased and I was curious how it would look like. But this was a real disappointment. If you visit Manchester and if you are interested in China and if you love Chinatowns all over the world, don't go to Manchester Chinatown. There is nothing to see except the archway. 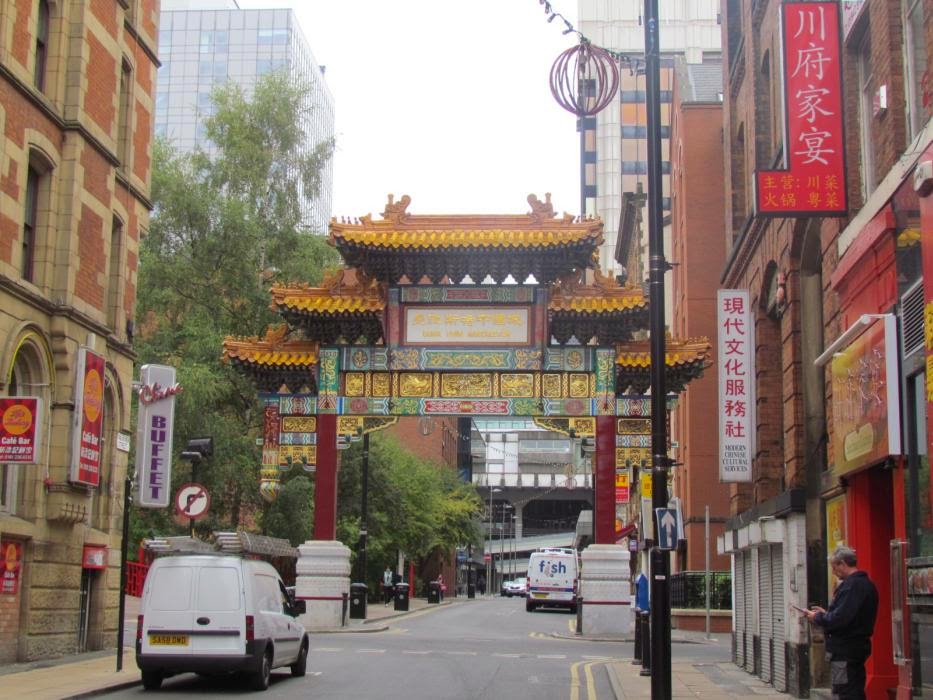 No crowded groceries, supermarkets or furniture shops, no Chinese decoration, nothing that is so typical of Chinatowns. After a short walk we decided to leave Manchester for the countryside.

Our first stop was Haworth, a village famous because of the Brontë sisters who lived there. I have always wanted to visit the Haworth Parsonage since I read 'Jane Eyre' and 'Wuthering Heights' when I was about 17.

I wasn’t disappointed. We arrived in quite an awful weather - the sky was gloomy and the air was filled with drizzling rain -  so there were only a few tourists strolling around. We had the chance to see the parsonage when there were only a few people.
I was quite amazed that there was so much of the furniture that had actually belonged to the Brontës. Often, museums just have furniture which is of the correct period in them so it was really wonderful to see the real things, including the sofa on which Emily died. Many, many personal belongings are on show. Letters and books, study boards, art work, dresses, shoes, jewellery, hair and sewing boxes. The house is beautifully decorated and I can highly recommend visiting it if you are interested in the Brontës.
The one thing that surprised me was the size of the place. I had always imagined the parsonage to be really big as it looks very impressive in photos. In reality it is much smaller than I had thought it to be and it must have been quite a squeeze to fit 6 children, parents and a servant into it. Parsonages are usually huge, so I guess Haworth must have been a very poor parish.

After visiting the Parsonage we had a look at the graveyard. It was incredibly beautiful and terribly sad wandering around the graves. The village had awful sanitation in the early 19th century. Most of the water that ran into the town came in through the earth of the graveyard. Disease was widespread. There were long tomb stones filled up with the names of family members who had died in quick succession - the average life expectancy was only age 22! Can you imagine living in a house surrounded by this? It's no wonder many of their stories were filled with such sadness. 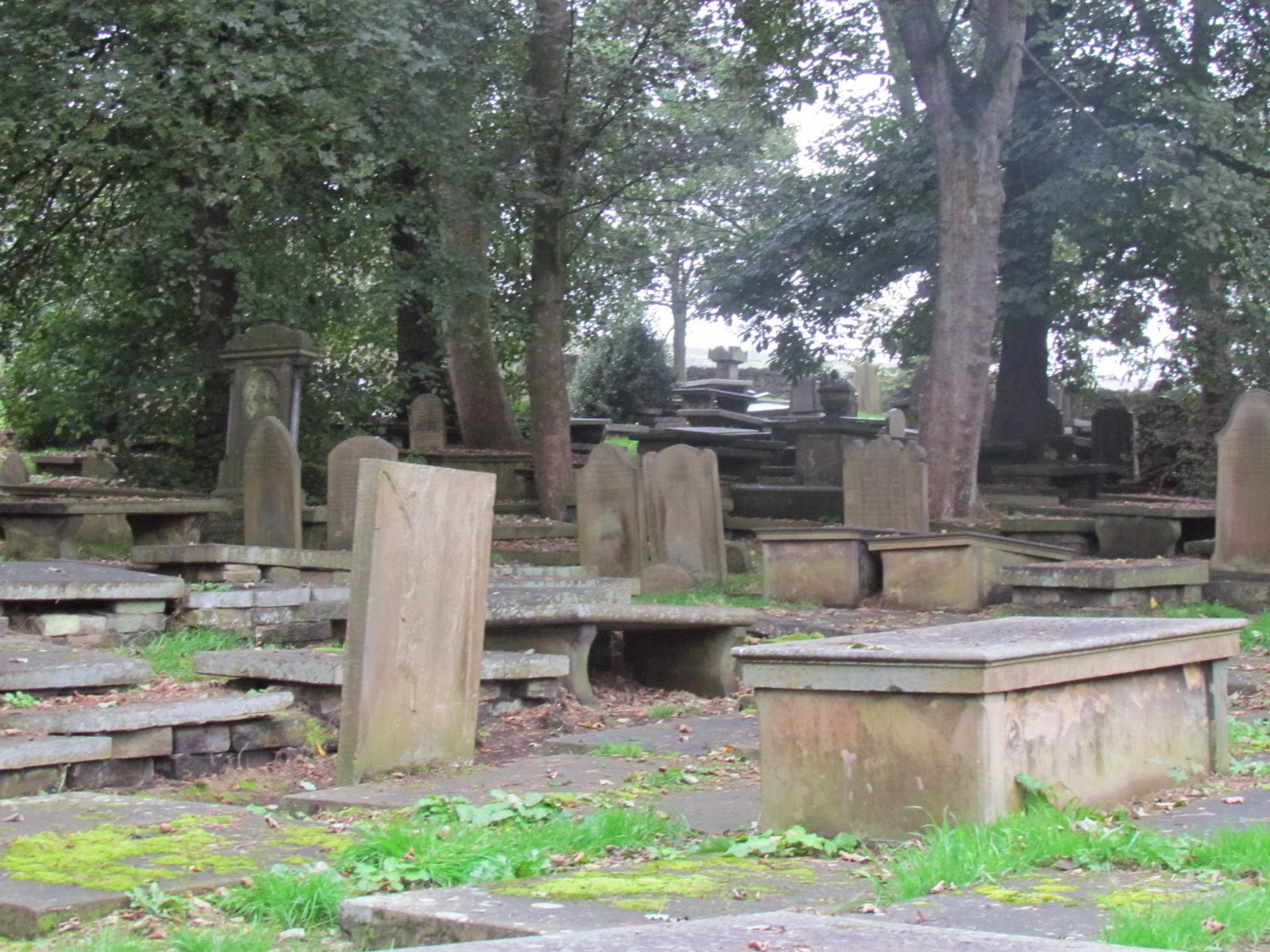 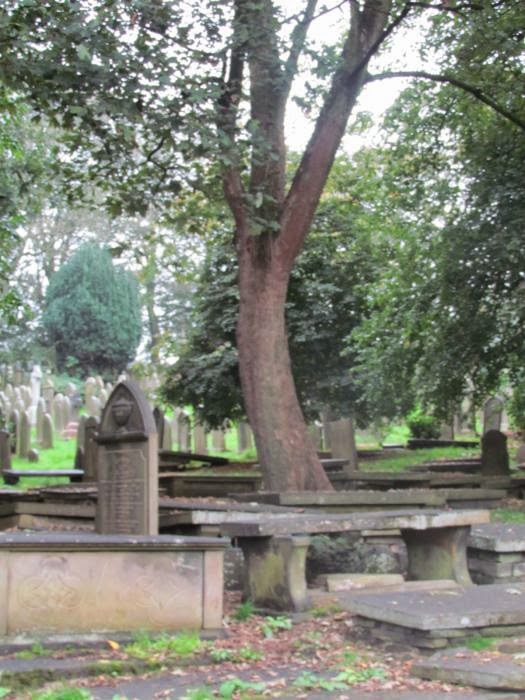 Then we strolled around the village. Haworth is so sweet! A wonderful village with small, interesting shops, nice pubs and tea rooms. Worth a visit, even in rain! 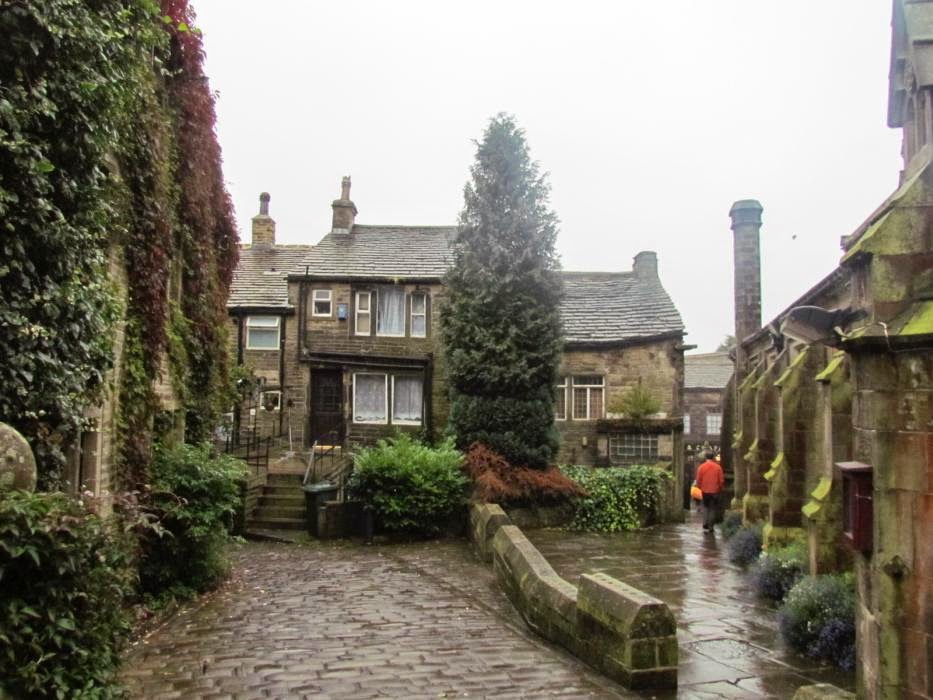 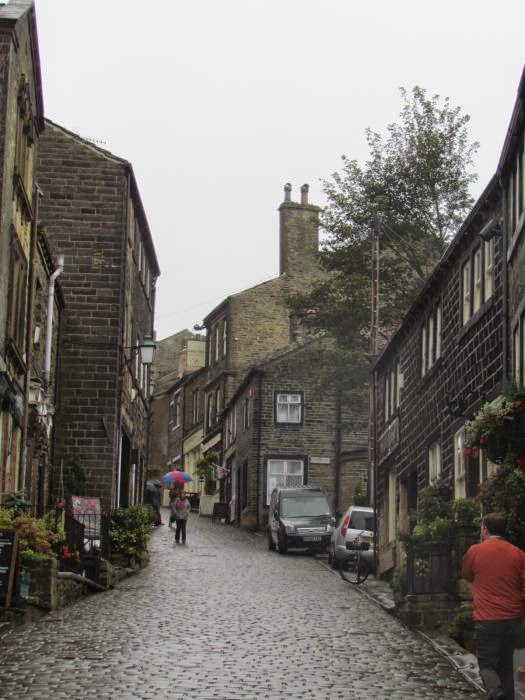 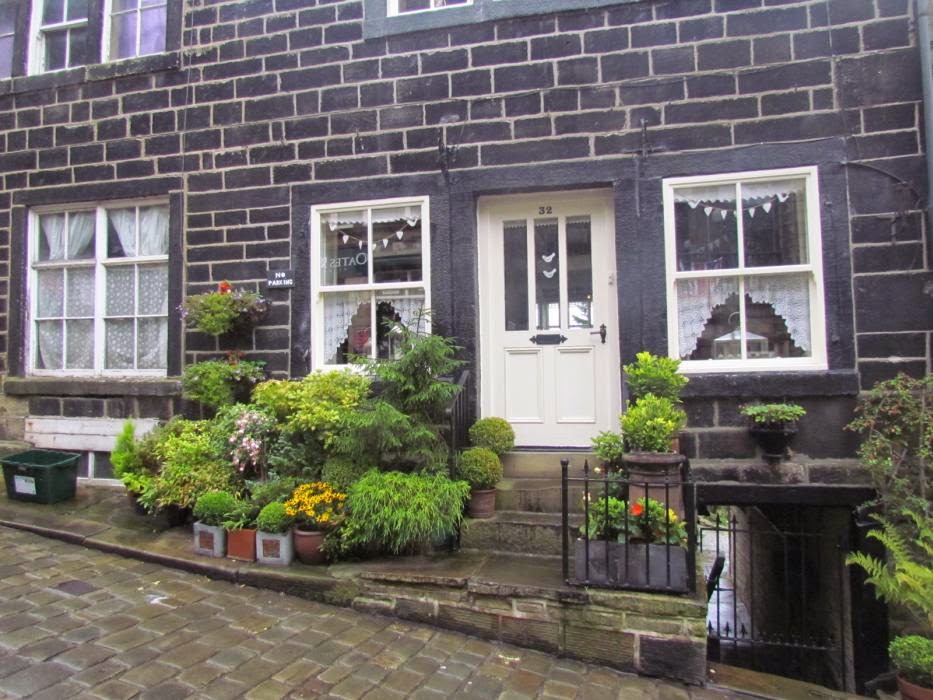 In the afternoon we headed for Embsay to settle down in our B&B room. I forgot to take any photos of it but it was a nice, comfortable and (most important for me!!!) quite accommodation. However, I would like to say a few words about the 'full English breakfast'. My dearest British friends, I have to admit that this is nothing I can recommend. Sausages, bacon, black pudding and an egg - who is able to digest so much animal protein in the mornings? The second morning I asked lovely Elaine just for a small portion of scrambled eggs and tomatoes. She also offered fresh fruit, yogurt, muesli, toast and home-made jam and marmalade. All in all very delicious and absolutely sufficient for me. It has been a really comfortable stay there.

The next day the weather didn't get better. So we decided to explore the countryside by car. We headed for Grassington, a little market town in Wharfedale. We passed Bolton Abbey, and the Linton waterfalls but as the rain got worse and worse we didn't stop. We just followed the route, admiring the landscape. 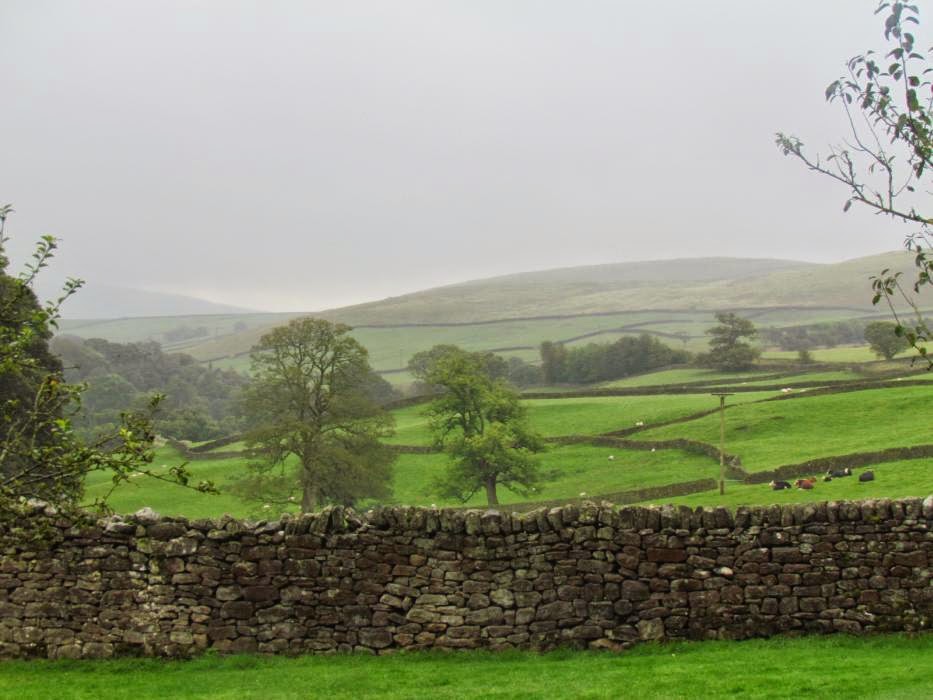 When the rain ceased we reached the small town of Grassington in Upper Wharfedale. Centred around its small cobbled square is a selection of shops, pubs and the village museum, offering food, clothing and gifts. 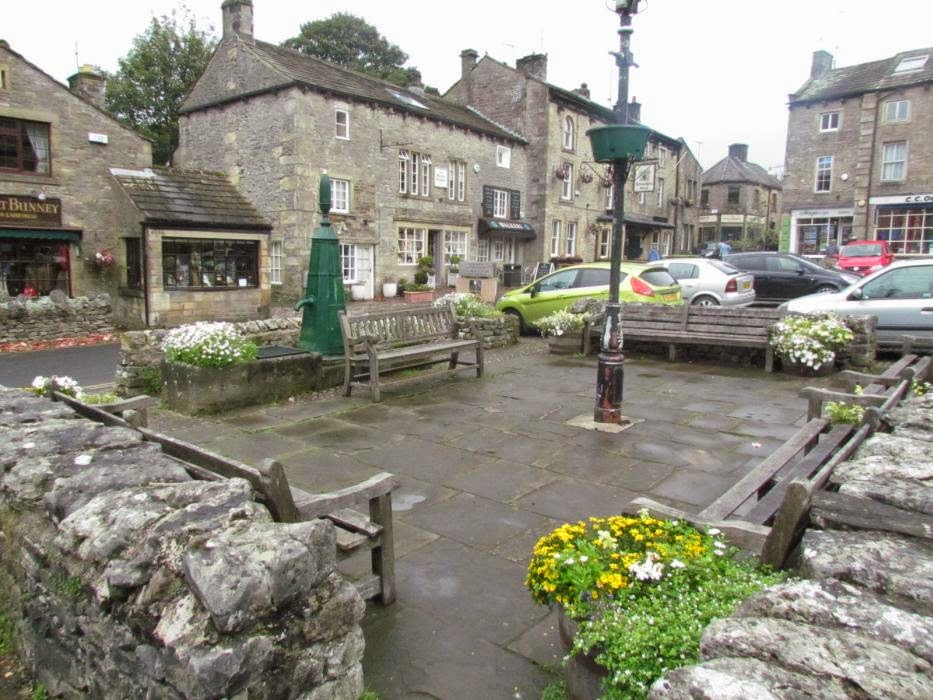 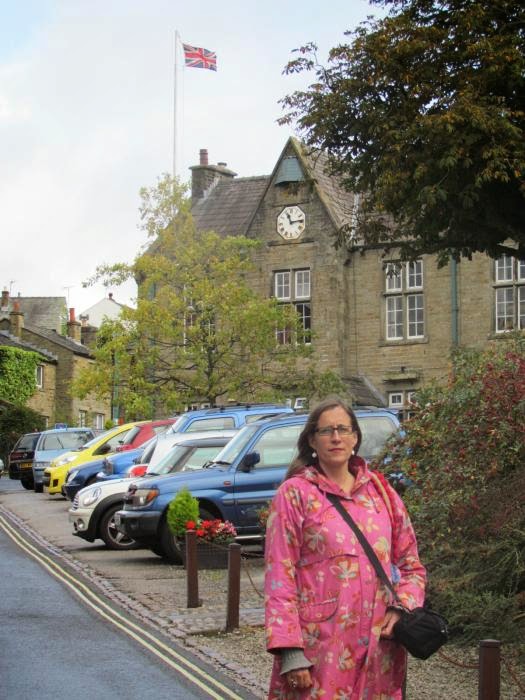 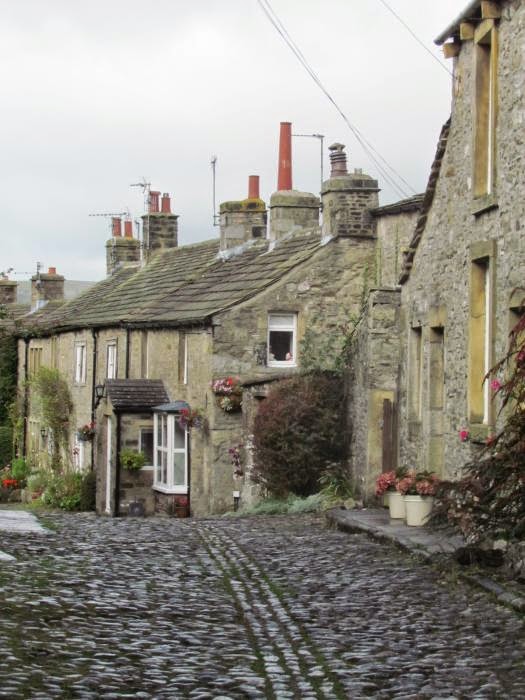 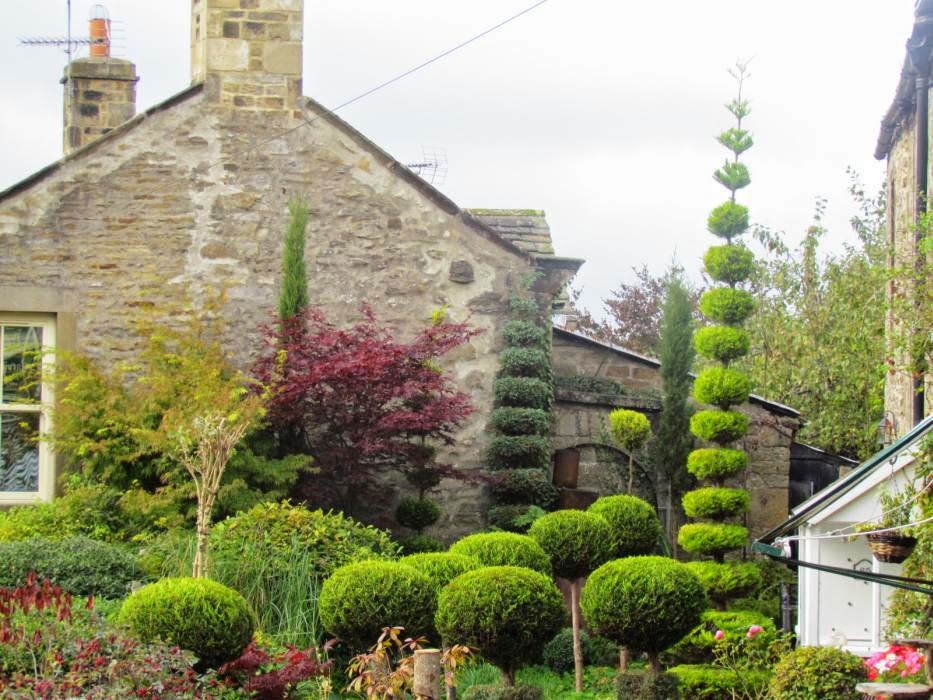 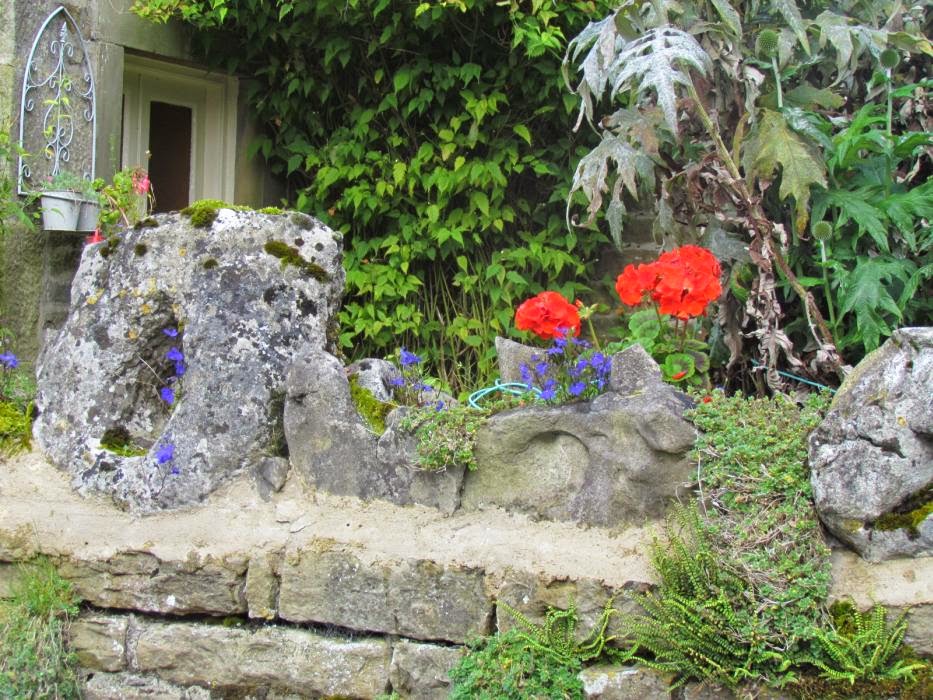 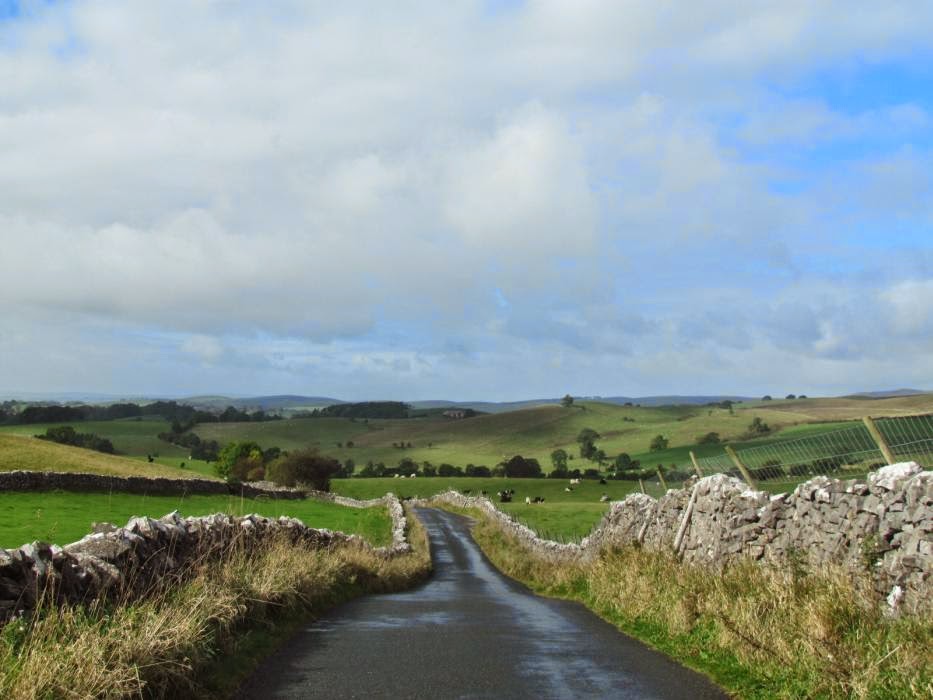 The sun was coming up and we decided to do some hiking. Not a long, strenuous walk but a little tour. We drove to Malham, a small village surrounded by limestone walls and with a stream running right through the middle of the village. We decided to take the walk to Malham Cove, a huge curving amphitheatre shaped cliff formation of limestone rock. The vertical face of the cliff is about 260 feet high. The top of the cove is a large area of limestone pavement. Originally, a large waterfall flowed over the cove as a glacier melted above it. But now a stream emerges from a cave at the bottom of the cove. 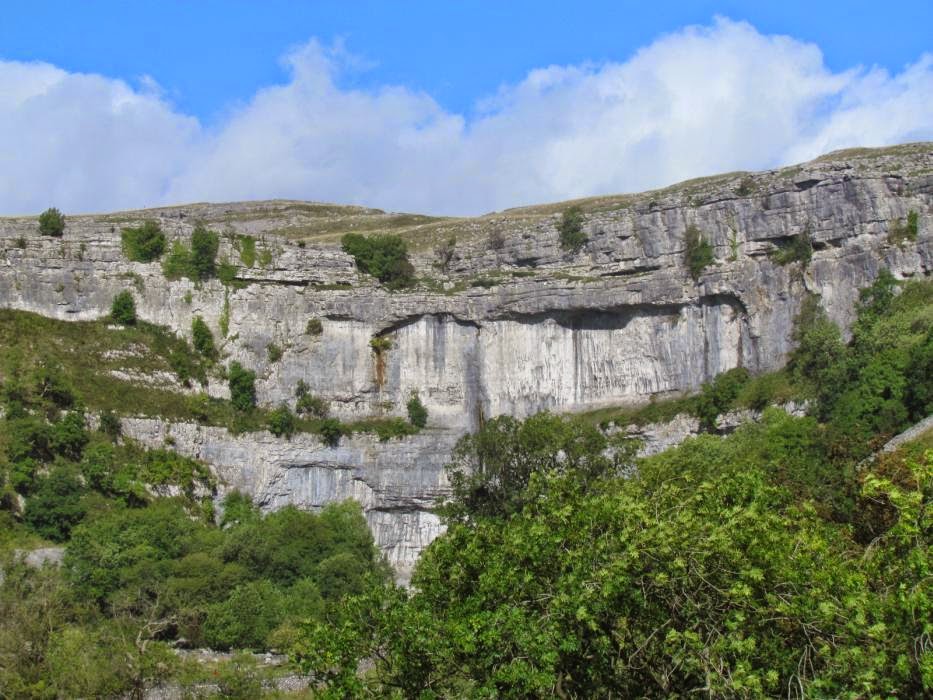 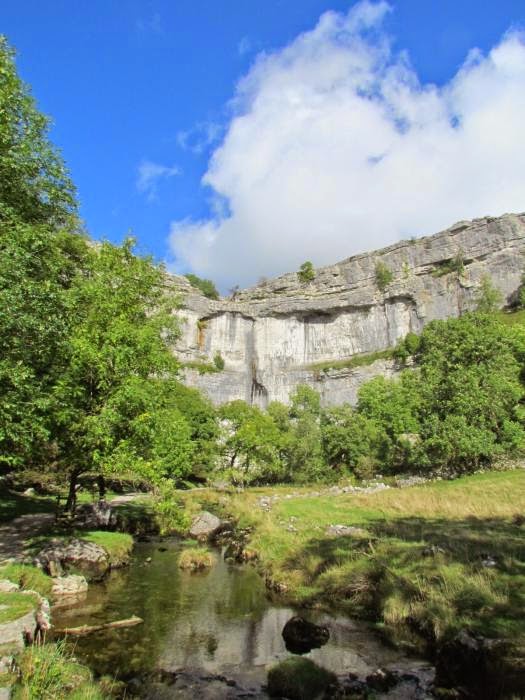 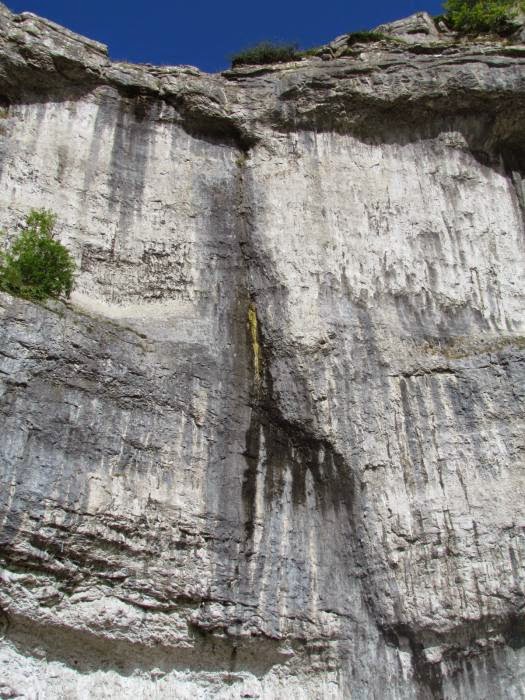 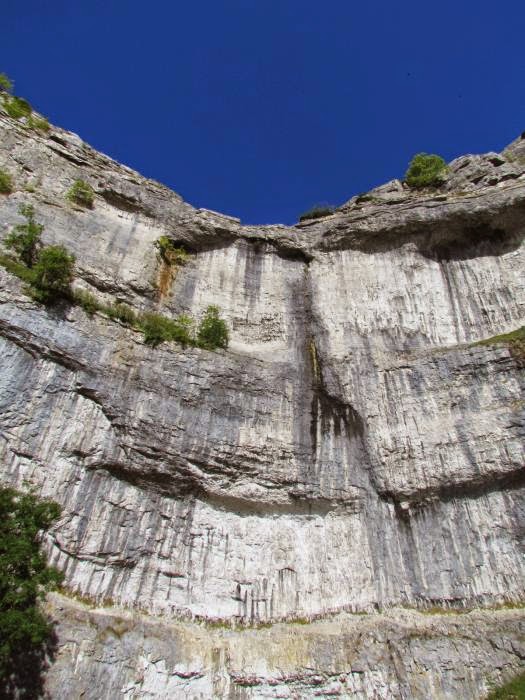 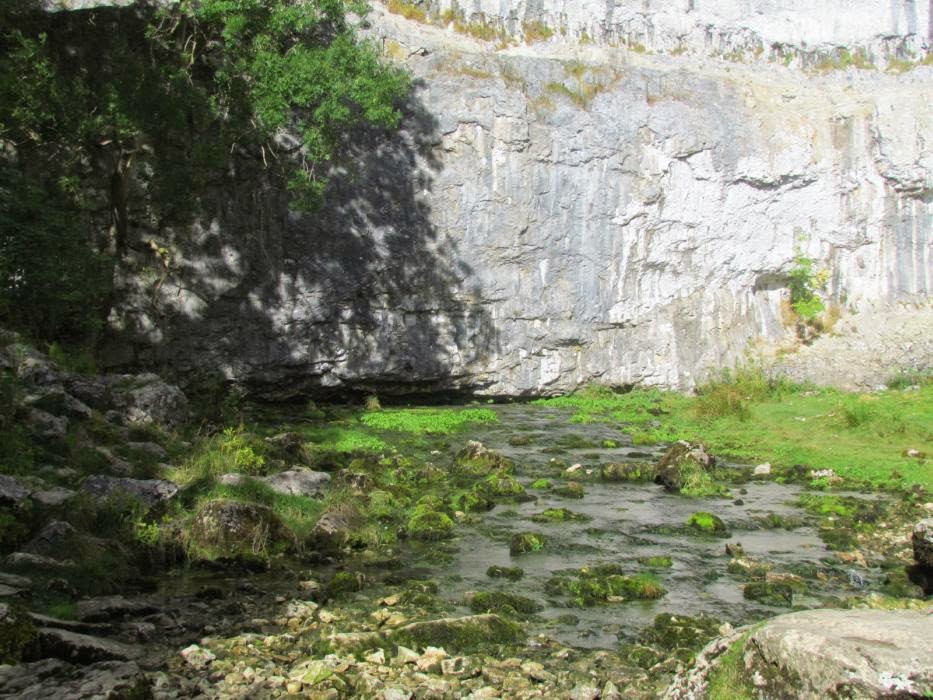 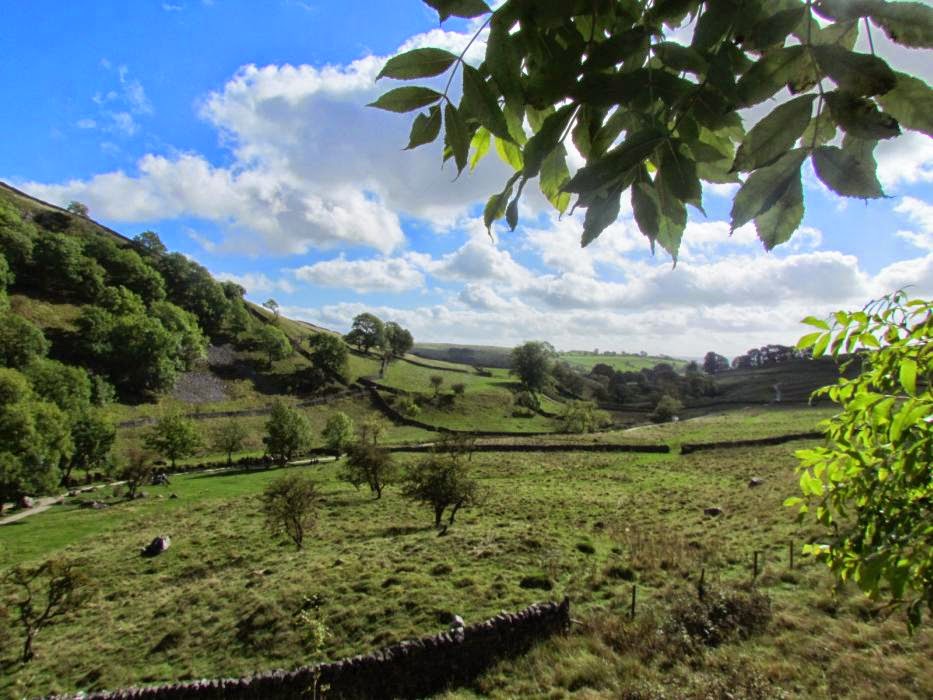 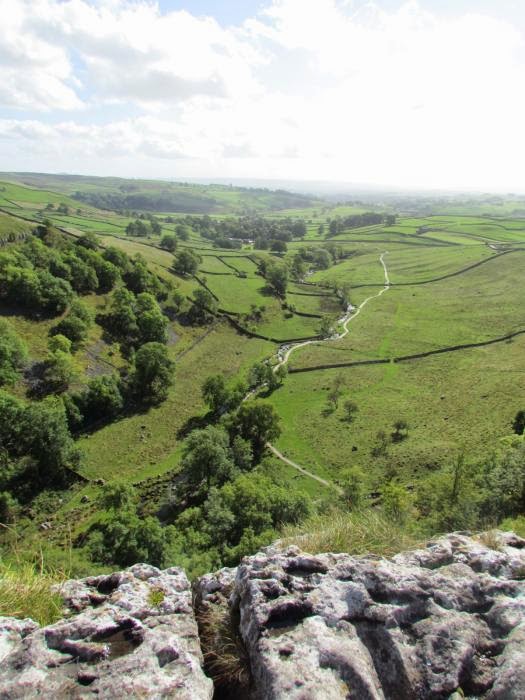 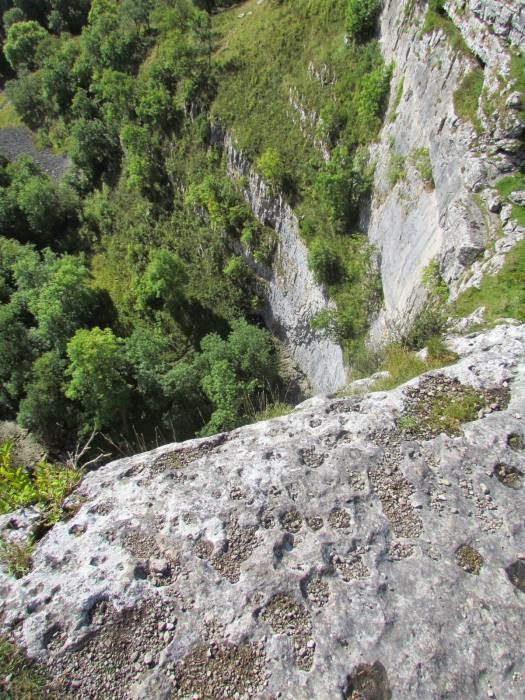 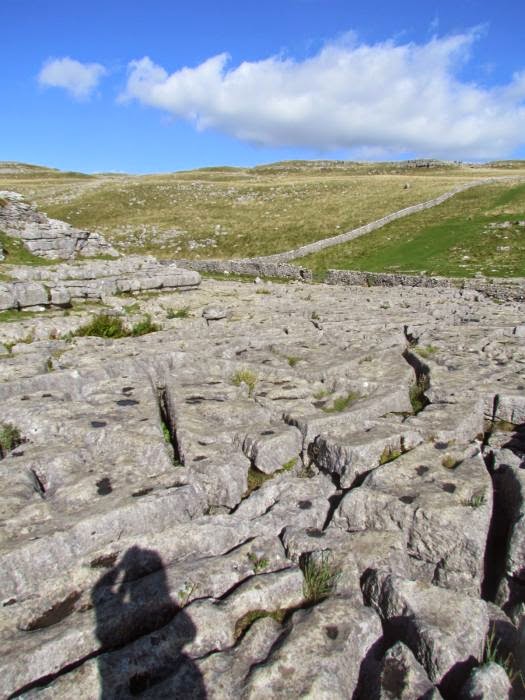 Because our walking-tour was so enjoyable we spontaneously decided to take the little diversion via Gordale Scar. This is a spectacular gorge, complete with waterfalls, cut right into the limestone hillside. The gorge was produced by water from melting glaciers sometime over the last three million years. 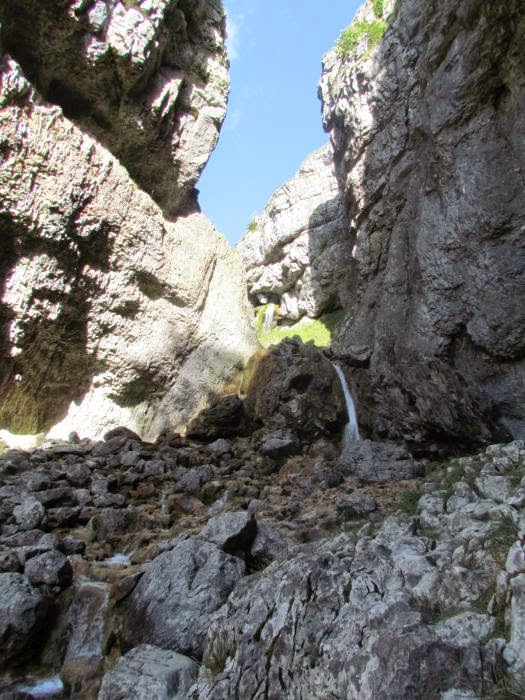 On the way back to Malham we passed 'Janet's Foss', a small but wonderful waterfall and pool in a kind of magical wood. Janet’s Foss got its name from a fairy queen in folklore (by the name ‘Jennet’) who was said to reside in the caves behind the falls. 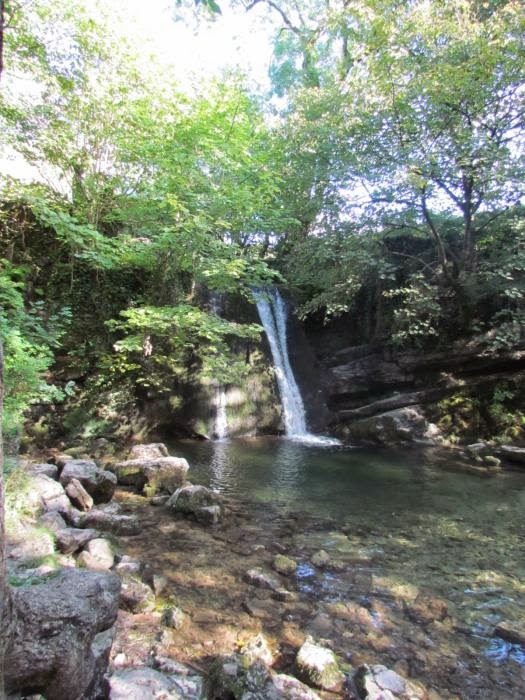 On the footpath we discovered a tree stump that has become home to hundreds of pennies to make a wish with Jennet 'the queen of the fairies... 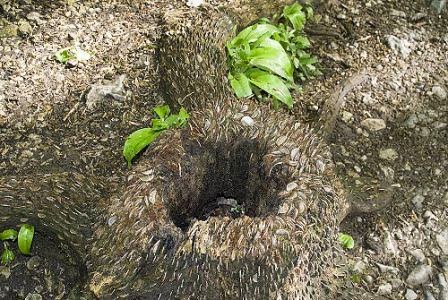 I could go on like this for ages but I think I have to stop now. Family time! The other part of our trip will follow soon, I promise.

Have a super Sunday,
Viola

Thank you for dropping by and leaving a comment. I love receiving your comments and I am totally happy when I see a new one has been added. I read every single one and try to send a reply whenever there is time.

Viola
near Hamburg, Schleswig-Holstein, Germany
Hello! Thanks for visiting my little blogspace. My name is Viola, I'm in my forties and a happily married mother of two gorgeous children. We live in the Northern part of Germany in a village near Hamburg. I love pottering round the house and garden, reading a good book or playing the piano. But what I'm really passionate about is chrochet.I like nothing better than using hook and yarn to create something cuddly, colourful and completely unique. I always have more projects on my hook than time to finish them. I'm not a native English speaker, so please excuse one or two mistakes. If you like, just take a cup of tea or coffee and stay for a while, Viola